Home
Countdowns
In 1859, Americans and English went to war because of the murder … of a pig.

The “Pig War” is probably one of the strangest armed conflicts in history. The story began in 1846 when the United States and Great Britain ratified the Oregon Treaty, which was supposed to end a long-standing border dispute. Return on this unique historical episode.

The Oregon Treaty specifies that the 49th parallel will mark the United States and British Columbia border, a dividing line still valid today.

If it sounds simple on paper, the reality turns out to be quite different: a set of islands located southwest of the city of Vancouver is problematic, and although the treaty specifies that the border “crosses the strait between the mainland Vancouver Island”, this fuzzy dividing line will be a source of great tension.

San Juan is one of the most important islands of this archipelago. Its strategic position at the mouth of the strait will push the United States and England to claim sovereignty when their nationals will begin to settle there.

In 1859, the British were in the majority on the island, and their presence was reinforced by the arrival of the Hudson’s Bay Company, which set up a sheep farm there. At the same time, 20 to 30 American colonists arrived on the island and took up residence there.

According to official reports at the time, the two groups of islanders had a relatively cordial relationship, but unfortunately, this was not to last. On June 15, 1859, a British-owned pig came to American farmer Lyman Cutlar and began to eat his potatoes. Mad with rage, Cutlar slaughters the animal.

The pork belongs to the British Charles Griffin, a member of the Hudson’s Bay Company. The latter has many beasts and is used to letting them roam freely on the island, and such an incident has likely happened before.

When Griffin learns of the animal’s death, he goes to Cutlar’s land to get an explanation. Cutler offers him $ 10 in compensation, but Griffin categorically refuses and denounces the American farmer to local British authorities who threaten to arrest him.

This incident angered local US citizens, who responded by drafting a petition to protect the US military.

THE TENSION IS CLIMBING

The document reaches General William S. Harney, commander of the openly anti-British Oregon Department. Without thinking, the man sent 66 men of the 9th American Infantry Division to San Juan on July 27, 1859.
When he heard the news, James Douglas, then governor of British Columbia, decided to send three British warships to the region as a show of force.

In the months that followed, tensions mounted, and the two nations reinforced their military presence in the region; and although outnumbered, American troops categorically refused to leave San Juan Island.

It was not until the arrival of Admiral Robert L. Baynes, Commander-in-Chief of the British Navy in the Pacific, for things to evolve.

James Douglas orders Baynes to land his troops on San Juan Island and engage in combat with the US Ninth Infantry Division, but the latter refuses, stating that he “would not involve two great nations in one. war born of a quarrel over a pig”.

Echoes of this strange conflict finally reach Washington and London, and officials from both nations are stunned that a trivial dispute has turned into a stalemate involving three warships, 84 guns and more than 2,600 men.

Fearing that the situation could worsen further, the two sides quickly entered into negotiations. They ultimately decided that the United States and Great Britain should maintain a military presence of fewer than 100 men on the island until a formal agreement can be reached.

The British set up their camp in the north of the island, while the Americans regrouped in the south. It was finally not until 1872 that an international commission led by Kaiser Wilhelm I of Germany placed the island under the Americans’ control and put a definitive end to the Pig War.

BY PLACING THE ISLAND UNDER AMERICAN CONTROL, THE INTERNATIONAL COMMISSION ENDS THE CONFLICT

Today, the British and American camps can still be visited on San Juan Island. Interesting fact: This is the only territory belonging to the United States’ national parks where a foreign flag is regularly hoisted. It was graciously donated to the country by the British government as a token of friendship. 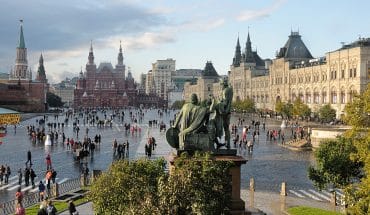