Home
Countdowns
10 Most Cruel Torture Devices of All Time 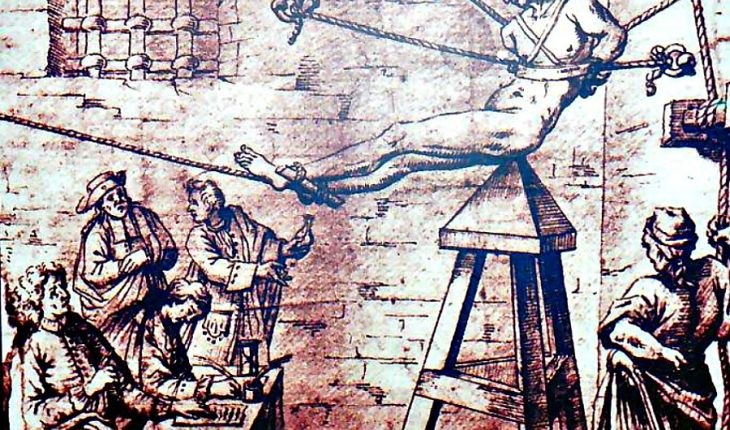 Throughout the history, people have devised a wide variety of ingeniously hideous methods of torture as a form of punishment for crimes, or simply to extract information. Here is a quick rundown of 10 most cruel and hideous torture devices and methods to ever come out of the darkest corners of the human history.

Although not painful or destructive in nature, Chinese water torture is often deemed one of the most debilitating torture methods ever conceived. This type of torture was also often used by Spanish Inquisition, as one of the first ”humane” torture methods.

Victims were restrained to a wooden table, and cold or warm water was then dripped slowly onto their forehead, allegedly driving them insane. On a Mythbusters episode, this idea was tried out, and they found out that the combination of restrainment, cold water, and the uncertainty when the next drop will fall, could become maddening after just few hours. Victims could be easily driven insane as they soon started to perceive a hollow space being gradually formed at the center of their forehead.

The Judas Cradle, also known as Judas chair, was a torture device invented in 16.th century Spain. During this torture, the criminal was first positioned in the waist harness above the sharp, pyramid-shaped seat. The point was then inserted into anus or vagina of the person, and then the person was slowly lowered by a system of ropes.

Medieval depiction of the Judas Cradle

The victims were usually naked, adding to the overall humiliation of the torture, and tortured by intense pressure and stretching of the orifice. Sometimes, various weights were tied to the legs, to dramatically increase the pain, and eventually tear muscular tissues of the orifice.

This torture could last from a few hours to several days. Device was never washed, so the torture could often lead to painful infection or even death.

The Thumbscrew was one of the most prevalent interrogatory torture devices of the Medieval Europe. It was a simple vice, with its crushing bars often lined with sharp metal tooth. It was used to slowly crush the victim’s thumbs or other fingers.

The crushing of the fingers was achieved by turning the handle on the top, slowly pushing its toothed crushing bars together. This torture method was primarily used to extract confessions from the prisoners, as it was both extremely painful and very lasting.

In the next stages of the torture, similar device, called ”the Boot” was often used to slowly crush the person’s feet.

Similar to Judas’s Cradle, but much worse, spanish donkey(also known as wooden horse) was mostly used by the Spanish Inquisition during the Late Middle Ages. It was a sharply angled wooden device of triangular shape, pointing upward, mounted on a horse-leg like support poles.

The naked victim was then made to sit on the the main board as if riding a horse, and various weights were attached to his or her feet, to increase the agony and prevent the victim from falling off.

According to historical sources, the wedge occassionally sliced entirely through the victim as a result of too much weight being attached to his or her feet.

This device was allegedly used during the American Civil War by Union soldiers, against their Confederate prisoners, who were forced to sit on the donkey until they passed out.

During the Middle Ages, the coffin was one of the most prevalent torture and execution methods, often seen in various movies set in the .medieval Europe The victims were stripped naked, and placed inside a metal cage, roughly made in the shape of the human body. Overweight victims were often forced into the smaller ”coffin”,for increased discomfort. The cage was then hung from a tree, gallows or city walls.

Serious crimes, such as heresy or murder, were punishable by death inside the coffin. Victim usually died from thirst, hunger or hypothermia during the course of next few days. Sometimes, onlookers would throw rocks and spoiled food to the victims, to further increase the humiliation and pain. After the person died, his flesh was devoured by birds and insects, leaving only a skeleton.

However, the coffin was not used only for execution, but also as a temporary punishment for minor offenders, who were placed in the coffin only for few days.

The lead sprinkler was a torture device often used to shower victims with molten lead, boiling oil, boiling water, tar or acid. It was essentially a ladle placed at the end of a long, iron handle. At first, the upper half of the sphere was removed, and the lower half was subsequently filled with the liquid of executioner’s choice. The perforated upper half was then re-attached, and shaking of the sprinkler showered the victim with the hot liquid inside the ladle.

Another variations of this torture method included pouring molten metal to victim’s mouth, anus or vagina, causing great deal of pain, serious inner burns, and eventual death. In Mongol Empire, the worst criminals were sometimes punished by pouring molten silver to their eyes.

A torture device designed especially for use on women, the breast ripper was one of the most brutal torture methods in the whole Middle Ages. It was usually used as a punitive or interrogational device on female criminals accused of adultery, self-induced abortion, blasphemy, heresy or witchcraft.

The red hot claws were placed on the victim’s exposed breasts, with the spikes penetrating them, achieving a powerful grasp. The ripper was then pulled away, ripping and shredding the breasts. Victim was usually scarred for life, as her breasts were usually torn apart. Due to heavy blood loss or infection, death often followed. A common variant of the Breast Ripper was known as “The Spider,” or ”Tarantula”. It was a similar instrument attached to a wall of torture chamber. Breasts of the victim were fixed to the clawed bars and she was then pulled by the executioner away from the wall, severely mutilating or even tearing her breasts off.

Who could forget the rack, commonly considered one of the most painful forms of medieval torture?

The Rack consisted of a large rectangular wooden frame, with a roller at one or both ends. Victim was positioned on the frame, his ankles were fastened to one roller and the wrists to the other. As the interrogation process progressed, a handle attached to the top roller was used to gradually stretch the limbs away from the body, resulting in excruciating pain.

Rack in the Tower of London

The ropes would pull the victim’s arms and legs, eventually dislocating his joints with loud popping noises, snapping his muscles and ligaments, and sometimes even ripping the person’s upper limbs right off his body.

Even forcing the prisoners to watch someone else being tortured on the rack was often enough to extract confessions.

In the later Middle Ages, a new, even more gruesome design of the rack appeared. Spikes penetrating victim’s back were also added, so as the limbs were pulled apart, also was the spinal cord.

The crocodile shears were a torture instrument used in late medieval Europe and usually reserved for men who tried to assassinate the king. These shears were made of metal, based on the concept of pincers. The insides of their hemicylindrical blades were lined with a great amount of spikes. After being heated to an excruciatingly hot temperature, the crocodile shears were applied to the victim’s erect penis, which was then torn from his body, or, if he was lucky, the device could just lead to intense bleeding from the severed arteries. Sounds like a device from hell, if there is one.

The head crusher was a brutal torture device commonly used only by the Spanish Inquisition. The person’s chin was placed over a bottom bar and the head under a uppermetal cap. The executioner then slowly turned the screw, gradually compressing the head between the bar and cap.

At first, the teeth were smashed and disintegrated into the jaw, then the eyes followed. Some variants of the head crusher even included a small containers that received the eyeballs squeezed out of the person’s eye sockets. The agony could last several hours, until the victim’s brain was finally crushed.

This horrendous instrument was an effective way to extract confessions from the victims, as the suffering could be prolonged to indefinite time, if the executioner chose to. However, even if the torture was stopped midway, the person, although still alive, often had irreversibly damaged brain, eyes or jaw.

Execution by elephant in Persia(Louis Rousselet, 1868)

In the medieval India and Persia, trained elephants were often used to crush the heads of criminals. This practice continued well into the 19th century. Execution by elephant in Persia (Louis Rousselet, 1868)